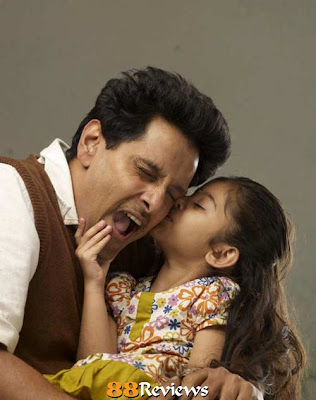 
Deiva Thirumagal is a feel good, emotional entertainer that would sweep you away and if you had forced someone to come with you to the theatre, I can definitely bet that someone would have thanked you for doing so.
Posted by DK at 9:36 PM

After reading multiple facebook status updates and few reviews, I had high hopes for the movie. Not sure if a different version was screened in Chennai, the movie did not meet its expectation. Vikram, Sara, Santhanam were the highlights according to me. Court scenes could have been more serious keeping in mind the impact the movie wanted to give. Its an commercial entertainer/family subject lacks the seriousness. Like a totally unrelated song after Vikram hugs Anuska (which had no connection even in the climax), though I loved it for its technicality and Anuska. :) Also what's the point of not letting Vikram also stay with the girl in Swathi's house, like working somewhere else he would have been here and under the guardianship of swathi and her dad!

Felt the story line or direction did not make justice to Vikram's acting!

Vijesh - You have given a good analysis, a way different perspective.
I felt the court scenes were not very serious because it signifies the reality of court proceedings in the country, ie, it is far away from truth.

The song was may be for two reasons: 1) To confuse audience on how the climax is going to be and 2) To justify Banu's stance that a girl can indeed fall in love with a guy like Krishna.
Climax was a bit off and could bring up a lot of arguments amongst viewers, I agree.
The reason I liked the movie is because an art film like subject was presented like a commercial movie w/o much commercial elements but I would definitely take your perspectives too.