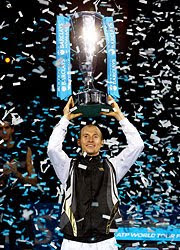 Finally we have the winner of the prestigious world tour finals in London. And for every ones surprise, it is Nikolay Davydenko.
I have always seen him as a sore fighter who gives up if he loses a set. He has reached semis and finals of some grand slams and world tour finals, but he seemed to have missed the "something" factor. On his way to triumph, he defeated the 2009 Australian Open, French Open, Wimbledon and US Open Champions in a single week. Another player whose name is worth mentioning is Robin Soderling, who made his finals debut due to the injury caused to Andy Roddick, but he proved to the world that he very much deserved a place in the top 8. Definitely, another surprise package of the tournament.
Posted by DK at 8:46 PM

I think Soderling and Del Potro are the players to watch out for. Potro, already has a grand slam to his name and now it will interesting to see how consistent he is.

True. Next year, we will get to see the best tennis even from 4th round.