Get together in "The Andamans" - Volume 3 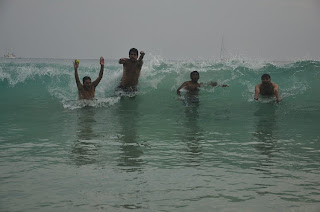 Chapter 9 : "Adieu Havelock" and Sun Sea
Date : 28th Jan 2011
Day : 4
Sunrise is not a big friend of Radha Nagar beach as it is located in the west side of Havelock and the Sun has to come out of the woods containing very tall trees. So, we decided to give it a miss. Breakfast menu, that too complimentary one, all over Havelock is quite similar, but Barefoot's was definitely tastier. We took a set of group pics near the beach jumping in air and rest was taken care by Vijesh and Arun Raag. We checked out of the hotel at around 11 AM and booked a cab back to Havelock jetty. The return journey to Port Blair was quite boring and everybody slept. Arun Raag and Srihari were the only ones to check out the deck and the news was the sea was very rough and thus contributed to a lot of folks puking that day. For the record, none of us did. 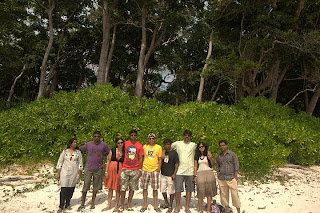 We reached Port Blair at 4:30 PM and checked in Sun Sea Resort. I don't know why they gave this name as it was not a resort and the word "Sun Sea" had no relevance to the ambiance or location. But the hotel was in the heart of the city and very easily accessible. We decided to catch up the sound and light show in the cellular jail which was at 6:30 PM and luckily on just Fridays, the 6:30 PM show was in English to help everyone understand the show. The jail was around 3/4th of a km from the hotel and we took auto's to reach the place. Sound and light show was good, not excellent. Arun Raag was the highlight when he kept looking at me on the rig 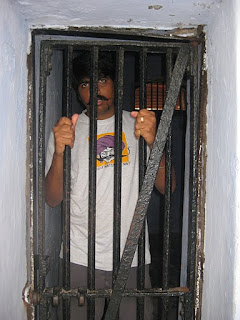 ht and Santy on the left, every time they played a Hindi patriotic song. After 2-3 songs, he started guessing the timing of the song and said, "Paatu poda poraanga da, ayyo." Overall, I would say, the show was not bad. We walked back to the hotel room and had dinner on the way in a Pure Veg restaurant called Annapurna. Dosa's, Poori's and different varieties of idlis were served. Highlight was tomato soup, which tasted like 'sweet puliyankottai'(tamarind seed) and lemon fried idli which was supposed to be shared by two, but they advertised enormously to get rid of it by calling it tasty and asking others to taste.

While having dinner, we had a voting session on which place to visit on the next day, Baratang or Jolly Buoy island. Baratang was around 135kms drive and required us to wake up by 4AM. Initial votes were very less for Baratang and then, after some convincing and under the table dealings, we had majority. Santy and Abi were very clear on their stance and they voted for Jolly Buoy. Luckily for them, Baratang tickets were sold out and we had to go to Jolly Bouy.

Day : 5
Date : 29th Jan 2010
We got ready by 7:30 and had buffet breakfast in Sun Sea; dosa, vada and toast. It was quite filling. Chinnaya, our cab driver was on time. He promised us that if we were back from Jolly Bouy boat before 3PM, he would drop us in Cellular Jail on time as the entry was restricted after 4PM. Jolly Bouy is around 30 kms from Port Blair and is a plastic free zone. We required permits and no one was allowed to stay back. We bought some bread and snacks for lunch since no food would be available there. We reached the entry point at 9AM and out boat started at 9:30AM. On the way, we played a very good game, which I would name as, "Kannu Adi Kandu Pudi", suggested by the Vijesh Abi couple. Again for rules, contact me offline. The game was hilarious and when we were done, we reached Jolly Buoy. 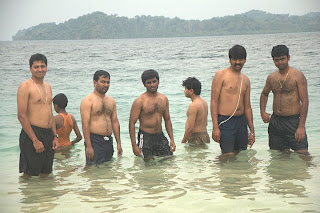 Jolly Buoy is famous for Snorkeling and corals. It is a INR 500 package that includes one snorkeling and one glass boat ride. The water was so clear that when a glass is the base for a boat, from the top we could see the sea life. Most of us went for snorkeling. The scuba certificate holder in Vijesh and Shruthi cautiously avoided it after trying out once or twice. I would rate the snorkeling experience from the perspective of how much marine life I saw as slightly better the the scuba one though the island is the one that makes the difference. We paid INR 200 extra for more snorkeling and me and Santy went twice for the paid one. When I returned, I heard a new tourist attraction had come up suddenly in the last 2 hours in Jolly Bouy. I came running to see what it was and what I saw there was that a Tamil guy was discussing the architecture of the castle built by our girls. It was good work by Shruthi and Aparna and while we were leaving back in the boat, we could see everyone taking snaps of it(no, not mana brandi, its true). 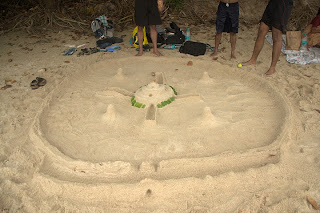 We were on time for the jail entry. The jail, called as kaala paani, was historic and the events were painful. A must see place, if you are in Port Blair. We hired two guides, one who speaks Hindi and the other, named Arun DK, who would translate the Hindi into Tamil. The guide morally cheated me by not giving any commission, but was forgiven. And for this act, the banyan tree saluted me. Why not, it has smelt the aroma of forgiveness for the first time in history inside the jail premises. I humbly bowed. We left the jail and split ourselves while walking back to the hotel.

After reaching the hotel, we decided to shop in a nearby gift store. Srihari, who was blossoming with the butterfly effect, desperately wanted to do shopping, not for him of course, and Abi and Shruthi helped him out. They spent around an hour in the shop without knowing the shopkeeper was a high BP patient. Srihari, with his bargaining skills made him reach the threshold and he started scolding everybody around. Me, Santy, Arun Raag and Gopal has gone to another shop and 3 of us got a tshirt which was very useful the next day photo shoot. When we came back, we watched the drama in the shop. It was very hilarious from a distance. Once the shop keeper cooled down and said one item cost INR 370, Srihari again asked, "350?". The shopkeeper lost his control again and when Vijesh asked if some item was unbreakable, he started throwing it away proving that it was indeed unbreakable. Somehow, they managed to pay the bill and come out of the shop. Dinner was good in Sun sea and we guys(only guys) spent some together after dinner. 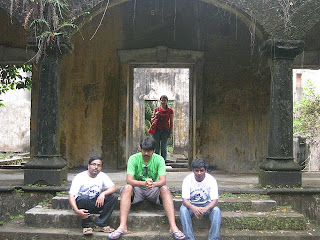 We had our flight scheduled at 12:45 PM so all we could afford to do was start early and visit Ross island, the British headquarters in the Andamans. We finished breakfast, checked out from the rooms, kept the luggage in the reception and were off to Ross, just a km from the hotel in auto. After reaching there and purchasing the tickets, me and Shruthi had to go back to the hotel so see if, "where Shruthi thought her camera was" and "where it was truly" matched or not. God is great, it matched, and God is double great, the camera was not there in the store where we shopped yesterday. Ross island is a beautiful place, with ruins of the British colony. Ideal place for photo shoot and would we miss it. We took around 400 pictures if I am not wron 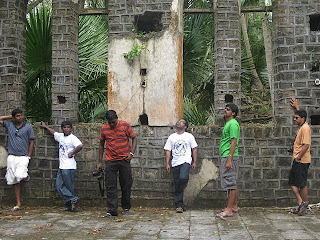 g and every picture in that place has come up great. The place is famous for film shooting and the picture on the right side is the ruined church where "Kaaka Kaaka" movies "Uyirin Uyire" song was shot. Unfortunately we could not spend much time there and came back to catch the return ferry where Chinnaiya was waiting for us in a cab. We did not waste time, took the luggage and were off to airport.

Flight was on time. And we were exactly on time. On our return journey, we again had some very ok tasting dish(name was not worth remembering) in the flight. We were in Chennai at 2:45, collected the baggage at 3 and paid adieu to each other at 3:15. The trip is over; phew, what a trip, more than the place, the togetherness was what made it so special. Ran away fast, but not very fast too. Perfect number of days for a perfect holiday, one or two more would have been good too but not a second less.

I was sitting in the flight back to Hyderabad and remembered Srihari's email. As I said earlier, the email was worth millions, but the trip was priceless...

While I am penning down the last words of this post, I am watching a song from the movie "Samurai" in Sun Music, the movie for which we went together for the first time in July 2002. The journey has continued till now and I strongly hope it does continue forever.
Posted by DK at 11:59 PM

Yup! All set for many other vacations in the years to come.

Very interesting! Could almost visualise the entire trip... This post will definitely help u relive the momemnts everytime u read it. Hope u all get to make many more such wonderful trips together :)

kalakkal - "and the other, named Arun DK, who would translate the Hindi into Tamil"

nice blog to summarize all the andaman experience.

I feel as if I have visited Andaman.
keep it up. very good.

I felt as if i myself visited Andaman. very nice to view the photos.