Who thinks he should be dropped?

I am highly irritated with some of the comments in cricinfo asking Rahul Dravid to step down or asking team management to drop him after the second test in Durban. And from the comments, I can definitely say the people who commented do not enjoy or appreciate test cricket. I agree he is not in his best form, and has been short of runs in the last 4 innings. But, he has looked solid throughout. Except for the second innings dismissal where he got out playing a bad shot, he perished to gems of deliveries by Steyn and Morkel, something that we could definitely call the balls of the match. Even on the seaming and very quick track on the first day of the first test, he was the one who looked solid and was able to stay there without fear whereas the other batsmen like Gambhir and even Laxman were all over the place.

And not to forget, his match winnin 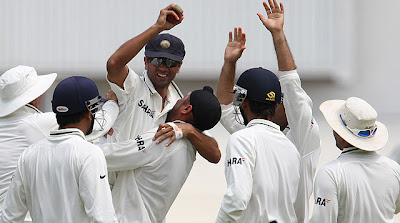 g innings of 190+ against Kiwis just weeks before. Some could argue that they were not such a great team, but to be fair to them, they being ranked number 8 in the world drew twice against the number one team. And as a bowling unit, they were very good. Rahul Dravid played an innings of patience and with the great performance of our bowlers, we clinched the series.

In the third test, I hope he shuts the vocal chords and pen swords of ridiculous people who are suggesting him to be dropped and Laxman to move to number 3. I am rather amused with their lack of knowledge that they are talking about the best number 3 test batsman in the world along with Ponting. He may have been patchy from 2007 but he is not yet done. Most importantly, he is fitter than Raina, Gambhir or even Unadhkat for that matter and there could be no arguments with respect to this even for non supporters of him.

And yes, a huge congratulations to Rahul Dravid for reaching 12000 runs in test cricket and reaching it faster than Sachin and Ponting. And of course, congrats again for becoming the first man in history to take 200 catches in test cricket. And for the record, if some of you think he has reached this because he used to do wicket keeping, you are wrong again. He has taken all his catches as a non wicket keeper. Click here to check for yourselves.

The Wall has a point to prove in the third test and I hope he makes people realize again that Technique is Gold and Patience is King.
Posted by DK at 9:55 PM

being a big fan of Dravid and his patience, i silently agree.. Dravid is patience personified in cricket. Mr. Patience of Cricket..

Well written! I agree. He's certainly not done yet.

We should also realize that with the advances in medical technology and rise in fitness levels of the players many players in this generation will play much longer than the previous generations. So, people should stop saying that players above 35 should make way for the younger generation. They should play as long as they are fit.

Dravid is supremely fit and he's one of the best batsmen India has ever produced, so we should actually hope and pray that he remains like this for many more years if we want India to continue to have a solid batsman at no.3.

Agree! If Dravid has to step down, then there are more ppl before him to go! Viru for example.

"the best number 3 test batsman in the world along with Ponting".. RD is definitely better than Ponting. comparisons like this are at times basless but still RD is much better than ponting. RD never had openers like Hayden and Langer, never in comfort zone, no McGrath or Warne to fall back. there are many such points to prove RD is a better soldier. Above all, Ponting and RD can both be good cricketers, RD is definitely a better sportsperson.