A short holiday to God's own country 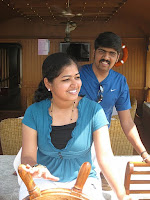 After attending my friends wedding in Thanjavur about which I have 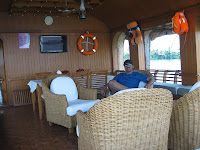 described here, me and my wife were all set for the Kerala trip we had planned by catching Ernakulam Express from Trichy.

We reached Cochin at 6:15 AM and our driver Saneesh was waiting for us as we zoomed to Kumarakom, a village near Kottayam around 70 kms from Cochin. We 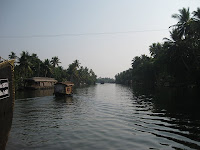 were to check in into a house boat of Paradise Resorts in Kumarakom. The resort folks were kind enough to give us a room for freshening up as the check-in time was 12 PM, thanks to our travel agent Evergreen Huts.

I always tell my friends I do not want to go for a trip but a holiday, and this was the time for the realization of the difference between the two. Perfect holiday for two days.

The houseboat was luxurious with a big deck consisting of 4 sofa chairs, cushions sit out areas around the border, tea table, dining table and a Samsung LCD TV. It had a very good bedroom with attached bath and a common wash area. We of course had a kitchen and refrigerator. Our cook in the houseboat was Smidheesh and our driver was Mr. Baby. Both were very friendly and courteous.

We started to c 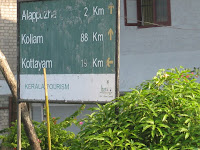 ruise to Azhapuzha which was 20 kms from Kumarakom at around 12:30 PM in the Vembanad Lake. The view, the breeze and feeling of blending with nature could not be described while we were traveling in the boat. We were served Elaneer plucked in front of us from a coconut tree. We stopped for lunch at around 2. Typical Kerala lunch consisting of Kerala rice, pulishery, muttai-gose poriyal, Sambar, pappadam, curd and fruit salad. The cruise continued and we reached Azhapuzha at around 5. My wife wanted to eat Pazhampori(Banana(Nendhra Pazham) sweet bajji) and Smidheesh purchased the fruit from a boat side shop. Just while crossing Azhapuzha, we had tea, french fries and Pazhampori. 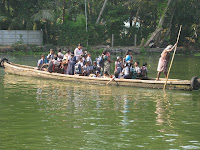 We reached a village called Kalignagiri around 4 kms from Azhapuzha on the way to Kollam and we halted there. Mr Jayakumar, JK as we called him was a villager of Kalignagiri who offered us a ride in a small boat around the village canals. We rowed along with him to view the streets(canals) and it felt like we are in a place like Venice but with everything around so natural.
Reports from Jk suggested there were around 2 lakh people in and around the village and their main occupation was selling fishes and prawns. The place Kalignagiri became so close to my heart that I still miss the place. We came back to the houseboat at 7PM. Dinner consisted of Chapathi, paneer, vendakka fry, paruppu fry and rice. We saw two episodes of HIMYM and here is where I saw the "Legendary" episode about which I am planning to write in my next posts. 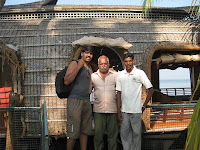 Sunrise was beautiful. We started our cruise back to Kum 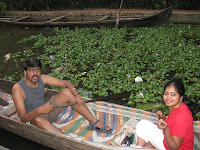 arakom at 8. On the way, we had our breakfast consisting of Aapam, stew, bread toast and tea. The return drive was a shortcut and we checked out at Abad Whispering Palms, the resort where we had planned to stay for this day at around 9:45 AM. We had a warm send off from Baby and Smidheesh.

Whispering Palms is one of the many resorts in Kumarakom where the notion is to just sit by the lake and relax. We had booked a lake view room and the view from our sit out area was too good. Every 2 minutes we saw some boat pass by, birds hunting for fishes; great relaxation. The resort had a infinity swimming pool giving the feeling that it is joining with the lake. I swam for around 30 minutes and we were off for the Ayurveda massage at 11 AM. Massage and the steam bath after that m 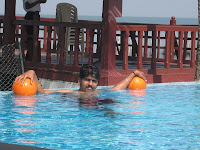 ade sure we were very hungry. Lunch was good, though very little for vegetarians. We could not control sleep, I think was the massage effect and the next thing I remember is it was 5:45 PM. 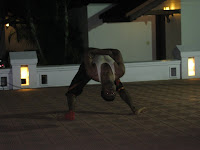 We had Kalari demonstration at 7:30 PM. It was mind blowing. I remembered Dams, my friend who is going to this class in Bangalore when I saw the performances. After the event, we roamed around the resort taking pics and then was dinner time. And then what, another 3 episodes of HIMYM.

07/02/10
Nothing much to speak about on this day. Felt very bad I was going to leave this place. Especially was missing Kalignagiri very badly. 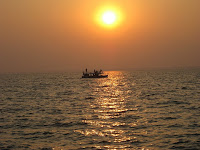 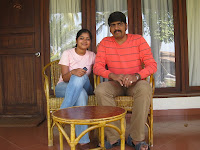 One thing to note was there is absolutely nothing go about and see here except for a bird sanctuary. You see so many birds in front of you and hence the need to go there does not run into your mind. I highly recommend this place for a 2-3 day holiday. Not for bachelors though, this is ideal for couples or families. 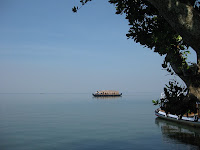 Finally, I realized why Kerala is called God's own country now and I repent the fact that I missed to see such a wonderful place which is so near to Chennai for so long.
Posted by DK at 9:08 PM

you have mentioned about food in almost all paragraph's :)

Nice travellogue.. Nice to know about the place and looks like you had a excellent cuisine.

I know i was earlier planning for a similar trip last year and we landed up on the northern part of the Arabian Sea :-)

Nice writeup.. Maybe this was the best holiday trip you have ever had..

Good one.. North east, Kerala, ... where next? Hope you are experiencing the 'Incredible India'.. kalaku machi..

Very Nice. I especially liked your food menu. Kerala , no doubt is the most scenic place in the south. The |God's own country| would be a lot better if it comes out of its CPM regime.

Nice!! I hope u enjoyed the beauty of the nature!! but dams pathi sonnathu than konjam porukka mudiyala .. He was going to Kalari class some decades ago !! :P

Hope u guys had a gr8 time...
i know abt the food provided there..its extraordinary(esp for NVS)

nice blog about your holiday machi.
hey pazhampuri super ah irukum. had tasted it in wayanad.
its been 6 months since i went to kalari class :(.